Upper Mustang region is also known as the ‘Last Forbidden Kingdom’ (organised treks only started visiting the region in 1992, and numbers are restricted with an average of less than 1,000 visiting each year) and it is steeped in undisturbed Tibetan Buddhist culture with ancient monasteries, traditional villages and cave dwellings high up on the cliffs, as well as the stunning architecture on view at the walled city of Lo Manthang (capital of Mustang region).  The Upper Mustang trek in to the remote Trans-Himalayan Region of this semi-independent Tibetan Kingdom offers an adventurous trekking itinerary with spectacular trekking through striking semi-arid desert with colorful rock formations, deep ravines and snow-capped peaks surrounding you. The history, culture, myth and legend blends perfectly with the stunning scenery.

In common usage, the name Mustang refers to the arid Tibet-like region at the northern end of the Kali Gandaki (known to its inhabitants as Lo). Mustang has a long, rich and complex history that makes it one of the most interesting places in Nepal. The early history of Lo is shrouded in legend, myth and mystery, but there are records of events in Lo as early as the 8th century. It is quite likely that the Tibetan poet Milarepa, who lived from 1040 to 1123, visited Lo. In Lo itself the countryside is similar to the Tibetan plateau with its endless expanses of yellow and grey rolling hills eroded by wind. There is more rain in the lower part of upper Mustang and the hills tend to be great red fluted cliffs of tiny round stones cemented together by mud. Villages are several hours apart and appear in the distance almost as mirages; during the summer season, after the crops are planted, they are green oasis in the desert-like landscape. 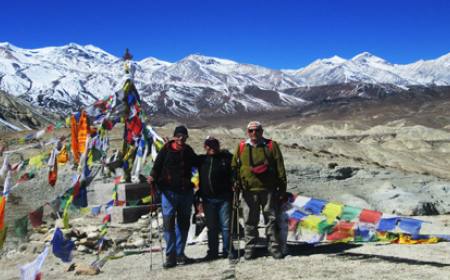 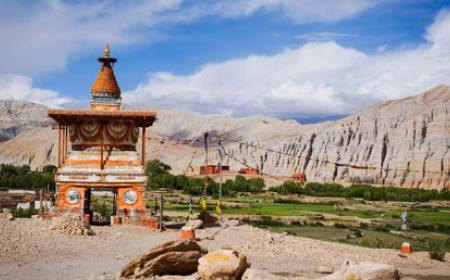