Mt. Kailash is located in far west corner of Tibet is the most sacred peak of Asia. The beauty of the 6700-meter high Mt. Kailash, that looks like a symmetrical cone shaped rock capped by pure crystalline ice all the time, is echoed in various mythological and literary works.

Dominating the north of the Himalayan Barrier with its spectacular view, the Mt. Kailash is equally venerated as the holiest pilgrimage site by Hindus, Buddhists, Jains and Bön-Po. Tibetans regard this mountain as the manifestation of Mt. Meru, “the navel of the earth” where founder of Bon religion, Tonpa Shenrab, is believed to have descended from heaven, Hindus as the abode of Lord Shiva, Buddhists as the abode of Samvara and Jains as a scared site where their prophet, Rishaba attained spiritual enlightenment.

With its four sheer walls, distinctive snow-capped peak, and valleys interspersed with brightly-clad Tibetan pilgrims, Mt. Kailash or Kang Rimpoche (precious snow-peak’, as known by the Tibetans) is an awe-inspiring sight. Four great rivers of Asia: the Karnali, the Indus, the Sutlej and the Brahmaputra (Tsangpo) originate from here.

Mt. Kailash over a 5630 meter Drolma La pass, clockwise for Buddhists and Hindus, and anti-clockwise followers of the ancient Bon religion, is said to erase the sins of a lifetime. To complete the Kailash pilgrimage one should bath in the sacred Lake Manasarovar, stunningly set on the Tibetan plateau bordered by the majestic Gurla Mandata.

On the journey to Mt. Kailash across the windswept Tibetan plateau, you will see cliff-top monasteries, wild-looking but hardy and hospitable Tibetans, yak caravans journeying over snowy passes, and the great peaks of the Himalaya with a foreground of grazing herds, yak skin tents and a glittering turquoise lake. Exploratory tours of significant towns of Tibet (i.e Lhasa, Gyantse, Shigatse etc) combined with a three-day trekking around mount Kailash, has become a very popular adventure activity in Tibet over the past few years.

Everest Journeys has been a leading specialist in Mt. Kailash trips for over a decade. We offer a two-week to four-week tours to Mt. Kailash on a private or group departure basis. If, however, any of our dates are unsuitable for you, we can arrange a private or customized tour to suit your exact requirements and dates. In short, we will make every effort to get you on the tour you want, when you want. 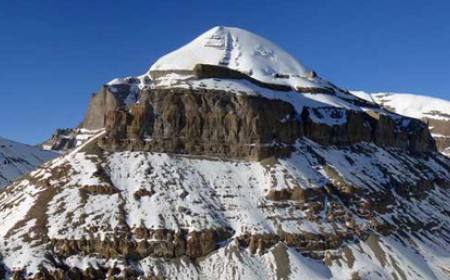 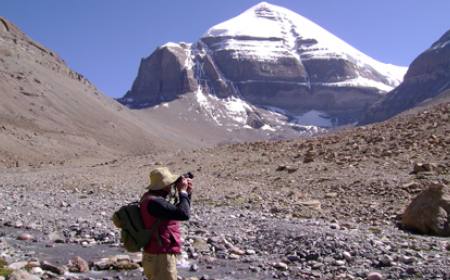