Kanchenjunga is the third highest of the world’s peaks and one of the most remote trekking areas in the Nepal Himalaya. Kanchenjunga base camp trek take to you from the south-eastern corner of Nepal at altitude of just 70m. to the base camp of this, one of the greatest mountain masses in the world. Kanchenjunga region is one of Nepal’s least trekked areas and certainly one of its most beautiful. There are several approaches to Taplejung: from Ilam which involves a full day drive through dirt road or by driving from Dharan to Basantpur and then trekking for several days to Taplejung. Kanchenjunga trek can be shortened by taking a flight to Taplejung, which is the central hub for the region. Kanchenjunga base camp trekking trails climb gradually along and crossing Tamur river, which rises from the snows of Kanchenjunga itself. Continuing along the Ghunsa river and crossing Ghunsa, a Sherpa village marked with prayer flags and gompa, where two trails from Kanchenjunga’s southern flank join the northbound route, leads through rhododendron thicket and the forested area.

Climbing further up, the long awaited Jannu Glacier and then Jannu (7,710m.) or “Mystery peak” or “Peak of terror” finally comes into full appearance. Moving along the hilltop path and after reaching Pangpema (5,150m.) the giant Kanchenjunga (8,586m.) becomes visible. Huge, towering Kanchenjunga presents the crowning finale to this long trek. Return trip from Pangpema crosses mountain passes between Yalung Glacier and Kanchenjunga Glacier affording excursion around the north and south faces of Kanchenjunga. Two trails head south from Ghunsa to Ranze.

The early route scrambles over loose snow covered rocks to cross Lapsang La (5,932m.). The lower alternative traverses three passes with the highest Sinion La (4,800m.). At Ramze, the gigantic Yalung Glacier enclosed by rocky crags and ice precipice appears. Visiting the Yalung Glacier, the next days’ trek down to cobble stone streets of Taplejung by passing through rhododendron thickets, mountainside villages, terrace fields along mountain path are equally interesting. Abundant wildlife can be seen along the trail including musk deer, blue sheep and, for the believer, the Yeti! Magnificent views of Everest, Makalu and the Kanchenjunga massif will make the trip memorable. 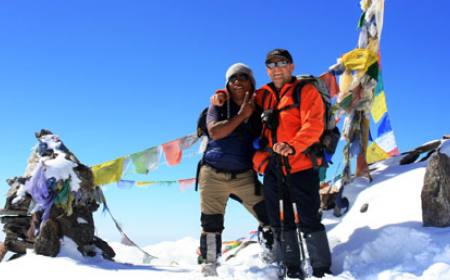 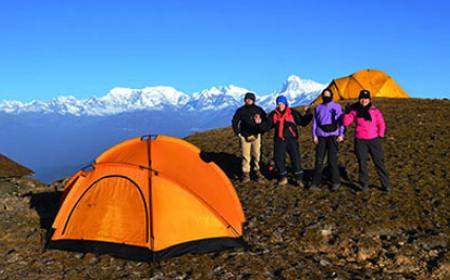