High in the heart of the eastern Himalaya, seven valleys radiate from Mount Makalu, the world's 5th highest peak. Of these, the Barun Valley holds some of the last remaining pristine forests and alpine meadows in Nepal. From the bottom of the valley at just over 1,400 feet, the Himalaya rise to the snow-capped tip of Makalu at 8,463 meters. Within this expanse, the Makalu-Barun National Park contains some of the richest and most diverse pockets of plants and animals in Nepal, elsewhere lost to spreading human habitation. Given its isolated location this area has retained a rich cultural heritage and preserved its unique biological and cultural treasures. The Makalu-Barun National Park and Conservation Area was established in 1992 as Nepal 's eighth national park and was the first to include an adjacent inhabited conservation area as a buffer.

A new park management approach encourages local people to become actively involved in protecting the forests and natural resources upon which their lives depend and in conserving their own rich cultural heritage. Traditional resource management systems, such as community controlled grazing and forest guardianship are being strengthened and low level technologies introduced where appropriate. Covering an area of 2,330 square kilometers, the Makalu-Barun National Park is a vital component of the greater Mt. Everest ecosystem which includes Nepal's Sagarmatha (Mt. Everest 8848m.) National Park to the west and the Qomolungma Nature Preserve in the Tibet Autonomous Region of China to the north. 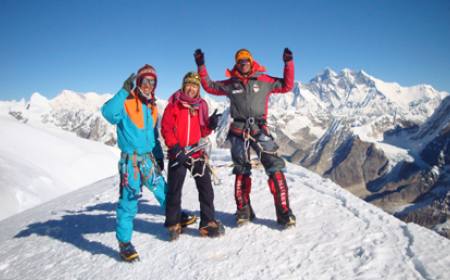